The Feminist Task Force is in solidarity with women around the world calling for CLIMATE JUSTICE. Since 2007 when the first Women’s Tribunal took place, the Feminist Task Force has made the links between gender, poverty and the impacts of climate change on women, their families and their communities. On September 21, 2014 women will join in sending a strong message to heads of state to call for climate and environmental justice!  The following Call to March and join us on September 21 in New York City or Rio, Delhi, Bogota, Berlin, London and the many other locations where women’s activism will take place calling for gender and climate justice!

We are calling all women, friends and allies to join our contingent of Women for Climate Justice as we help create a massive Peoples’ Climate March – the largest climate march in history – on Sunday, September 21st in New York City, two days before heads of state of the world’s nations will meet for a Climate Summit at the United Nations.

To change everything, it will take everyone.

Scientists warn us that global warming is spiraling out of control and we are running out of time to avoid planetary catastrophe. The time for change is now, not only to preserve the planet for future generations but to ensure a world worth saving- to create a global community where women and girls, men and boys live in peace, harmony and equality- fulfilling their individual and collective hopes and dreams on a safe and ecologically sustainable planet.

We call on community groups, organizations and networks, individual activists and broad alliances, working on a range of women’s human rights, sustainable development, feminist and social justice issues to march with us for climate justice.

March with us to demand a new model of sustainable development. March with us to promote safe, people-centered renewable energy systems and halt the destructive path towards climate chaos.  March with us to deliver more equitable distribution of power, resources, energy, and wealth between countries, between rich and poor and between men and women.

March with us to proclaim that there can be no climate justice without gender justice– acknowledging that women, particularly in the Global South, have contributed the least to global warming and degradation of the planet and yet they suffer the most from environmental destruction and unsustainable consumption and production.

We especially call on you – the diverse, vibrant and energetic community of women activists in the United States to join us in New York City on September 21st to change the climate narrative in this country.

Climate change is a women’s human rights and development issue in developing countries and here in the United States. The U.S. needs to be a leader in the fight against climate change, to practice environmental justice in its own communities, and to take responsibility for how our actions as a nation affect people around the globe. We must demand the U.S. government policy creates a future in which climate protection, human rights and gender equality are realized throughout the world.

We also call upon women activists around the world to use this unique moment to re-commit and to mobilize for action– whether you are with us in New York City on September 21st, or in solidarity though actions and statements of resistance in your local communities. We will march in solidarity with all women on the frontlines of climate disruption around the world to demand action for climate justice, a safe and healthy planet and support for community resilience.

An opportunity for global transformation is within reach, and it will neither start nor end with one day.  But we know that when the challenge is greatest, and the moment is right, there is power in taking to the streets. A brighter future will not be realized unless we demand it, and our demand will best be heard with all women’s voices in a powerful chorus together.

We urge all women and women’s organizations to share this call with their members, networks, family and friends and to spread the word as widely as you can in the press and on and social media.

The People’s Climate March will take place on September 21, 2014 in New York City beginning at 11:30am. Marchers will assemble north of Columbus Circle no later than 10:30am 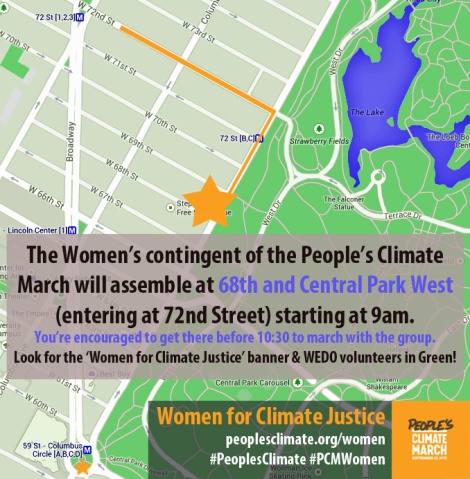 The route begins near Columbus Circle at the southwest corner of Central Park. The march will begin down 59th Street to 6th Avenue, then south down 6th Avenue until 42nd Street. We then continue West on 42nd Street until we reach 11th Avenue and then finally assemble between 38th and 34th Street.