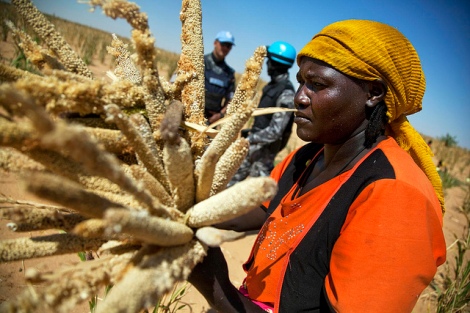 This International Women’s Day (IWD) we commemorate RURAL WOMEN as well as use the occasion to raise concerns about their situation worldwide. Here at the United Nations (UN) Headquarters, the theme for the 56th Commission on the Status of Women (CSW), RURAL WOMEN and their role in eradicating poverty and hunger, brings overdue attention to rural women and looks also at the current challenges they face. UN Secretary General Ban Ki Moon praised the advancements of women in certain sectors while acknowledging that rural women and girls, who make up a quarter of the global population, “routinely figure at the bottom of every economic, social and political indicator, from income, education and health to participation in decision-making.”

Coincidentally, our celebration of IWD comes days after the news this week from the World Bank that the world has met the first UN Millennium Development Goal – to half extreme poverty by 2015. It would seem, therefore, we have a dual reason for celebrating.

Unfortunately, although we can take hope in some news of poverty reduction, the stories, experiences, information and testimonies we have heard and documented – not only during the CSW and but in our Women’s Tribunals on Poverty and Gender and Climate Change series — do not paint such a rosy picture as the graphs and charts by the WB researchers.

It seems that what they are measuring is in real numbers, not real lives.

The WB research draws on data and expertise for the period 1981-2008, “with preliminary estimates (on a smaller sample) for 2010.” Without factoring the full impact of the 2008 financial crisis and ongoing economic crisis, and applying a gender analysis, the news of halving extreme poverty appears to be a half-truth.

This same year the World Bank World Development Report on Gender Equality and Development argues that “gender equality is a core development objective in its own right. It is also smart economics.” It’s great to see all the attention on women, with much on women’s economic potential — Newsweek and the Daily Beast have their 150 Fearless Women and a cadre of articles featuring women’s empowerment, the Financial Times their Women at the Top. Even Google has an IWD doodle today. The fact remains that progress toward gender equality has been limited.

When factoring in the impact of climate change on the lives of rural and impoverished women, the news is even more dire. As rural women, María Ibarcena, Cleofé Huatay, Hilaria Yanque Bereche and Bertha Atencio Sonilda, testified in the Cuzco, Peru Gender and Climate Justice Tribunal late last year, the effects of climate change have altered their lives by generating economic losses, increased poverty and perpetuated a lack of confidence and hope in the future. It has caused the break-up of their families and brought both physical ailments and mental anguish.

In Bangladesh, 34 year old Munni Akhter testified of her struggles as a woman farmer. After her home was destroyed twice by river erosion, she started her life in a small cottage with her 2 sons and a daughter. “All my crops have been destroyed by saline flood 4 years ago. My only cow, and 20 ducks along with my furnishings floated away. Our debt has increased because of the diseases we suffered from drinking the flood water. Many new skin diseases have emerged that were not there before.”

In the Niger Delta, Nigeria, a region long known for environmental degradation due to oil extraction in the area, rural women who rely on farming have experienced food insecurity due to the drastic changes in the rainfall pattern that have severely affected agricultural yields in the region.

These and many other accounts were heard and presented at the CSW. Even UN Women Executive Director, Michelle Bachelet, acknowledged at the Rural Women’s Speak-Out last week that rural women’s contribution as agricultural farmers was hampered by the current development model which did not allow “the agricultural sector to prosper.” Rural women, who account for a great proportion of the agricultural labor force, produce the majority of food grown, especially in subsistence farming, and perform most of the unpaid care work in rural areas.

As we celebrate women in all their diversity and their achievements today, let us remember and herald the voices of RURAL WOMEN who in their daily struggle bring forth hope and courage, bravery and perseverance in the face of adversity day in and day out.